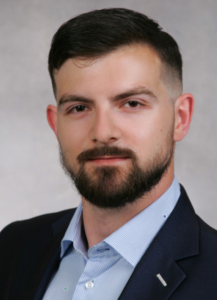 My name is Radosław Gniazdowski. My passion is programming and computer graphics. Between 2009 and 2014 I have studied Informatics at the Gdańsk University of Technology and finished with Bachelors degree.

Although I’ve recently finished studying computer technology, my journey with computers began many years earlier. Approximately around 2002/2003 I’ve started experimenting with Linux. It didn’t take long before I started playing with SDL 1.2 and OpenGL and C programming language. At that time NeHe OpenGL tutorials were quite popular and they really helped me learn new stuff – the frustum.org site was also really helpful. Around 2004 I’ve made a SDL game called “SDL-Fighter” which was a simple 2D scrolling shoot’em up (shmup). During that time I’ve also experimented with GTK+ library and OpenGL which resulted in “3DCatalogViewer” being created. During this time these games and other programs were made available on my own website along with libsdl.org page (back then an extra page was available for people to post information on projects that are using the SDL library).

I really enjoy programming and I find computer graphics fascinating.

From September 2014 to November 2015 I’ve been working on my own graphics and game engine – it wasn’t easy and I didn’t quite finish it. Actually, I really need to start it from scratch. Fortunately it wasn’t all for nothing as I learned lots of new things – and I’ve also made an enormous amount of mistakes and errors. What’s important to me is that I’ve been doing something what I really like. I’ve been programming since I’ve turned 13. But just coding isn’t enough – I also needed to code what I want and do it for myself. Besides, I’ve had the idea for a game engine and a name for it back in 2007. Many years had passed before I could finally jump with both feet into it.

From November 2015 to May 2016 I’ve been helping setting up and working in VR Gaming Cafe in my home town – sadly there were not enough clients and the owner had to close business anyway – which really is a shame because the interior design of the cafe was truly special and unseen in Europe at that time.

From August 2016 to the end of October 2016 I was writing my own Android game in Java using libGDX and Intellij IDEA – which I must say was quite pleasant experience. The idea for this game was from 2014, then in 2015 I started coding it as dynamic library plugin for my game engine and dropped it. I decided to pick it up and port the plugin code to Java and build it on top of libGDX library and then released it on Google Play store (the source is available on GitHub).

In early 2017, I joined Transition Technologies PSC as an IoT consultant – where I worked on more than 20 projects over the next five years. This allowed me to gain experience with ThingWorx IoT Platform and Java web applications running on Tomcat on the backend. Depending on the requirements this applications would also require a lot of customizations written in JavaScript (executed on the Rhino engine) and Java (as extensions uploaded in form of additional jars). In regards to IoT I have experience in both the platform side and the agent side which in this case involved working with C and C++ based libraries and porting of existing code for embedded devices (QNX / Legato / other ARM based) and configuring multi-platform cross compilation with CMake. From other technologies I have done a lot of work with Node.js, TypeScript and writing complex extensions for VS Code. This job often involved direct contact with a client, business travel and working on-site. This experience also made me learn that C++ is not always a best choice and technologies used for a given solution should be tailored to the problem they are intended to solve.

For the next couple of years I want to focus more on technologies used on the web, but do not forget about C++ altogether. Recently I’ve started refreshing my memory on it and learning new features present in C++17 and C++20 and the updates done to the standard look very promising especially in regards to multithreading support. On GitHub I have a couple of repositories already made public and one of them is used as a playground to learn new features of C++, embed V8 engine for JavaScript and create a VS Code extension to support development for this custom V8 app.

Here is the list of all my past and current projects.